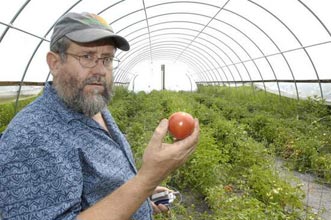 When Dan Mielke's kids grew up, got married and moved away, he had a problem.

As a small farmer, he couldn't afford to hire a new work force. In order to remain viable, he needed to grow his crops cheaper and with less labor.

In 2002, he received a grant from the United States Department of Agriculture to try a new kind of farming with high tunnels. The "tunnels" are made of clear greenhouse film that hang over rows of crops. The greenhouse effect allows Mielke to triple his growing season. He can sell beans, peppers and strawberries throughout the year rather than just at harvest. "Instead of planting my tomatoes the first week of June, I can plant the first week of March," he said. "Now I can sell my crops to the same customer base three times as often."

The tunnels keep out disease, save water and help control the temperature. It's newer technology, and Mielke said it's a way for small farmers to stay afloat in the corporate agriculture climate.

Master gardeners and organic farmers are warming up to the tunnels and Mielke wants other growers to take note. The high tunnels are reasonably priced and are worth the investment.

"I doubled my profits and cut my labor to a fifth of the usual cost," he said.

"The northern growers can create a longer season and make their lives a lot easier," Mielke said. "This is a great way to support the 'buy fresh, buy local' concept and will greatly help the eco-municipality movement."

Mielke will speak on the high-tunnel agriculture concept in November at the National Small Farm Trade Show in Missouri.