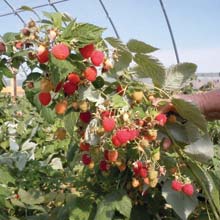 Chuck and Barbara Schulstad are the owners and operators of Woodside Raspberries, a 160 acre farm purchased by Chuck's grandfather in 1913. In 2002, the Schulstads retired from their careers with the Fargo, ND public school system and moved to the farm in Minnesota. Previously running only a pick-your-own raspberry patch and small garden, the Schulstads were introduced to the concept of high tunnels in 2005 during a Master Gardening core class.

Finding the idea of using high tunnels very interesting, the Schulstads decided to purchase one of their own. Says Barb, "The person who taught the vegetable section of our Master Gardener core class mentioned GrowSpan to us and we called for a catalog." They purchased the smallest of their Round Premium High Tunnels in 2007 and use it for tomatoes, cucumbers, peppers and other small produce.

In 2010, the University of Minnesota provided Woodside Raspberries with a second high tunnel to be used for a four-year study on raspberries and blueberries, of which the Schulstads are the on-site managers and administrators. The third and largest high tunnel was purchased through the NRCS "Know Your Farmer, Know Your Food" high tunnel program and is shared with the University of Minnesota. This building is used for an apple tree study managed by the Schulstads, and for growing produce that they can bring to market.

Chuck explains, "The environment created by the tunnels accelerates the growing season and extends it several weeks before and after our typical Zone 3 season." He continues, "We see far less problems with insects and bugs than we did when we were growing outdoors." Not only is the growing season longer, with improved conditions, but the Schulstads are finding they can grow much more than they had originally planned. They are growing garlic, onions and carrots, among many others.

Besides the larger variety of crops they can now grow, the Schulstads have seen quite an increase in the quality of what they are producing. "Raspberries and strawberries are gorgeous in the tunnels which allow us to bring them to market even when the outdoor season is over." Continues Chuck, "The concept of the high tunnel is wonderful and really enhances the growing season here in 'short season' country. Our high tunnels are working out very well!"