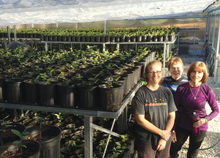 Not many people attempt to grow tea in the United States, but Steve Lorch, CEO of Table Rock Tea Company, is one of those brave souls. Lorch founded the company in 2008 after being inspired while on a mission trip to the famous Kapkatet tea region of Kenya. Table Rock's land is located just outside of Table Rock State Park in Pickens, South Carolina, which lends itself uniquely well for tea production. Lorch and his wife Jennifer's goal was to grow "Uniquely American tea" in the foothills of Table Rock Mountain, and so their adventure began.

The company was originally housing their tea plants in a neighbor's hoop house, but this was not an optimal growing environment for tea, which needs an ultra-controlled growing environment to thrive. Lorch said, "In order to sustain production and expansion of about one to two acres per year, we needed our own dedicated greenhouse structure." Lorch needed a customized structure designed for propagating tea from seeds and cuttings. GrowSpan rose to the top of his list. "Growers Supply was the only company willing to meet all of our design requirements, while also being cost-effective and offering a well-built structure," said Lorch. Table Rock Tea Company purchased one 72' wide by 48' long three bay gutter connected GrowSpan S1000 Commercial Greenhouse, an 8' wide by 12' long tea propagation container, a custom 2-tier polymax bench system and Svensson Solaro 50% reflective shade to help protect the sensitive crop. 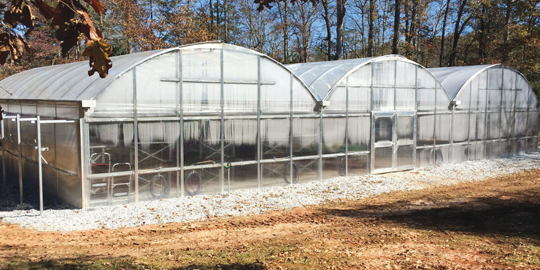 Lorch has been happy with all of his GrowSpan purchases, "The three bay GrowSpan S1000 Commercial Greenhouse has allowed us to have a controlled environment to safely house the tea in its most vulnerable stages prior to being put out in the field." Lorch continued, "When young, tea is very prone to sunburn, so the Svensson Solaro reflective shade has worked like a charm and is very critical to our operation, while the propagation container allows us to conduct our genetics program to develop a better strain of tea for our colder mountain region." Lorch really enjoys his custom 2-tier polymax bench system, which allows the company to house over 17,000 tea plants without wasting valuable square footage within his greenhouse.

GrowSpan met Lorch's expectations on the project, "Overall, everyone says the house is very professional in addition to being solidly built, and the comfortable, fun working space has allowed for more volunteers to get involved in the company."